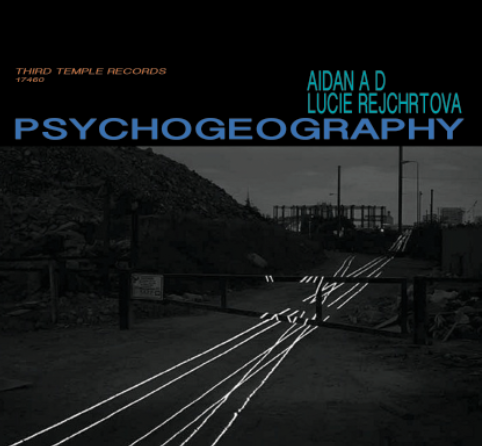 A cross-genre venture in electronica where nu-jazz and two-step collide with dub, hip-hop and ambient.
More info 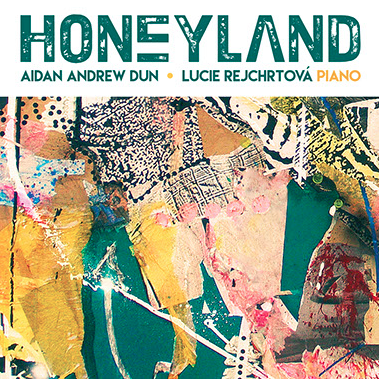 A compilation of AAD’s single tracks.

“…There’s a pattern in the stars above, also within…”

A cross-genre venture in electronica where nu-jazz and two-step collide with dub, hip-hop and ambient.

10. The Ethnic Cleansing of Palestine

13. Invitation To The Golden Age

14. Comin On The Transport

HEART IN RUIN resources a ruined abbey (Tintern in Wales) as a metaphor for relationship breakdown.

Sampling the metropolis through alertness and emptiness, DRIFT follows conduits of unknowing and lateral-thinking into urban past and possible future, above all the vertical present where the city is revealed as sacred.

A nu-jazz essay on all things radically escapist suggests perhaps that the concept of a ‘day-of-peace’ implies supreme non-conformism.

The democratizing influence of the humble haiku in Japanese culture has been enormous. This brief intense poetic form (much-loved by Buddhist monks) was readily memorized. Suddenly writing-materials posed no obstacle to composition; and the poet did not have to be a gentleman-of-leisure to string together seventeen syllables.

Chant from the Old Testament Book of Job posing the existential question: Can faith in God be justified in the light of evil’s problematic reality? LR, organs and lead-guitar, AAD vox and bassline. Yes, I. The Rasta term ‘I-and-I’ is a philosophical statement of non-duality. ‘Trodding’ is West Indian for ‘treading’ and seems to carry a greater burden and gravitas, a weight of determination as well as of suffering.

The Rasta term ‘I-and-I’ is a philosophical statement of non-duality. ‘Trodding’ is West Indian for ‘treading’ and seems to carry a greater burden and gravitas, a weight of determination as well as of suffering.

A light-hearted ska-treatment with lyrics name-checking a few seminal producers of yesteryear.

The sacred history of Britain is concentrated in the district of Kings Cross. The old Druid colleges of Albion stood here. Boudicca died here with 120,000 Celtic warriors at Battle Bridge. Here, the Messianic Celtic Church was founded at the site of St Pancras Old Church, believed by many scholars to be the oldest church in the Western hemisphere. (Pancras is called in secret Vatican documents ’the Head and Mother of all Christian Churches’.)

And here in Kings Cross the visionary poets have sensed and seen the New Jerusalem. William Blake defined this zone of London as the heart of his divine city of political freedom and imagination. Arthur Rimbaud dreamed his futuristic Illuminations here in his year of miracles (1873).

Here Shelley underwent the most supernatural and transformative experiences of his life. And here WB Yeats based himself for twenty-three years, during which period he conceived his most arcane and little-understood magnum opus, A Vision (1929).

THE ETHNIC CLEANSING OF PALESTINE

Referring to the tragic event of 1948, when dozens of Palestinian villages were destroyed and thousands of lives lost.

THE ETHNIC CLEANSING OF PALESTINE

A lyrical meditation on the urban playground of the Sunchild of Kings Cross.

An evocation of the nocturnal underbelly of street-level prostitution – for which Kings Cross was once-upon-a-time notorious.

INVITATION TO THE GOLDEN AGE

A gnostic four-line verse by William Blake set to a liquid nu-jazz groove.

INVITATION TO THE GOLDEN AGE

COMING ON THE TRANSPORT

Downtempo study of the psychology of underground travel AAD, keys and vox. Love’s the Drummer A woman runs through the street on tiptoe, barefoot, the focus of her attention in the unmanifest. What is her raison d’etre or does she not have one?

COMING ON THE TRANSPORT

A woman runs through the street on tiptoe, barefoot, the focus of her attention in the unmanifest. What is her raison d’etre or does she not have one?

A bizarre celestial body invades a solar-system and threatens to rip the ocean away from a local planet: a love poem which uses an astronomical metaphor.

5. Her Feet As Two White Swans

15. Invitation To The Golden Quatrain 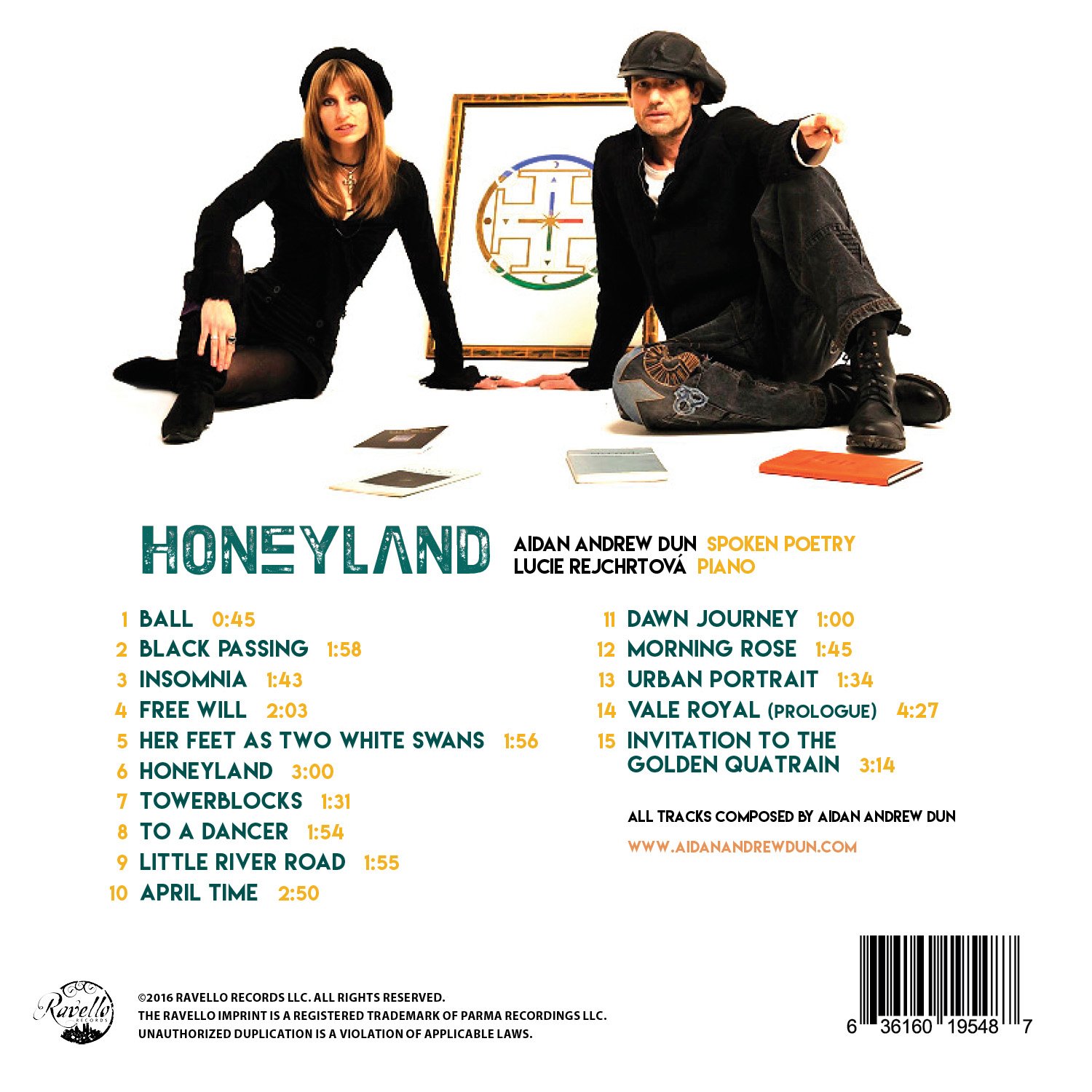 How was “Honeyland” conceived, and what were some of the main influences behind the works?

Around 2006 I sketched twelve or fourteen piano pieces in the studio with the idea of using them as settings for poems and I experimentally uploaded a few of these ‘wordscapes’ to my website. Then, rendezvousing with Lucie Rejchrtova in Amsterdam (where I was reading) in a crowded room she mysteriously beckoned me over to an old out-of-tune upright piano and out-of-the-blue played a few of my piano compositions….Read more

Ball is a love poem which celebrates circularity, androgyny, non-duality. Plato describes the soul as an omnipotent spherical entity, defining male and female as remnants of some cosmic ‘accident’ or ‘fall’ which created the dualistic realms. Thus the ‘nights of separation’ of the poem. But ‘Ball’ invokes the completeness and joy of pre-dualistic childhood at its climax, ‘gladly rolling’ referencing once again Plato’s all-powerful all-mobile beings.

In a pastoral setting Black Passing laments the death of summer. The first verse ends with a reference to ‘the near star’ (Sirius, associated in Egyptian myth with the goddess Isis) and suggests the star is burning with grief for the dismemberment of Osiris, the husband of Isis.
In the second verse the dying year is compared to an old tramp ‘landless traveller across the earth’ whose hair is dirty and ‘thick’ (matted, ropey) with a lifetime of suffering.

At the symbolic level this poem is a tribute to all vigilant artists, those who stay awake through the machine-age, maintaining intuition, imagination and feeling under the tyranny of reason.
Acute consciousness and hypersensitivity combined with sleeplessness result in the magnification of sensory data. Ruthless self-examination, inquisitorial self-scrutiny seem to be prowling about like thieves in the night, breaking into the complacent mind of everyday consciousness, while nocturnal sounds of the modern city form an uncomfortable soundscape in the background.

The idea behind the poem is that any freedom man may have has been purchased at a high price: suffering. In other words suffering is the precious gold which has paid for what we like to call ‘self-determination’.

HER FEET AS TWO WHITE SWANS

HER FEET AS TWO WHITE SWANS

Each verse of Honeyland catalogues effects of melancholy and depression yet each refrain urges the search for ‘Honeyland inside’.
Thoughts fixate on past failings, a lover’s absence; demons accuse ‘in subconscious whispers’. Suicidal meditations bring doubts as to the desirability of the afterlife. The heart is felt to be a frozen continent, all human relationships seem only opportunistic. The idea of an earthly paradise fades away.

A vision of ‘residential’ skyscrapers as giant standing-stones, resembling the ’sarsens’ of Stonehenge blown-up to vast proportions, constructed very possibly with sacrificial intentions: the slow torturing of those condemned to live in these vertical prisons.

The poem is the testament of one who claims to be immune to loneliness but finds himself unmasked. He runs beside a train with ‘lighted windows’ saying goodbye to someone precious. And when ‘the small lights’ have disappeared he breaks down to spend the loneliest night of his experience, full of remorse and regret, knowing he can’t change the past.

In the aftermath of a love-affair, in the springtime ‘when the world opens its doors’ the narrator of the poem is walking near an urban marina where he observes a young couple working on their old wooden boat. The woman somehow reminds him of his lost love. He turns away in despair and notices on a sunlit wall a plant rooted in the bricks ‘halfway up the sky’ and this green shred reminds him of himself, disdaining the world but still a long way from heaven.

Pond Street is in Hampstead (near Keats House) but the dawn referred to in the first verse is galactic dawn in the Great Platonic Year. The crown is the time of the Golden Age, the time of perfection and harmony, music and beauty. The ‘mysterious’ streets are the streets of the City of God. The name of five syllables refers to ‘the number of no change’ at the heart of the I Ching.

The poem is dedicated to the same dawn-goddess who appears in Dawn Journey. Now she is walking in her universal garden barefoot at sunrise.

In the first verse of Urban Portrait the evening sky is seen as an aquarium. Somehow, a ship sails above the world, its keel visible in the form of a black cloud which cuts though the sky. In the second verse we see a crowded street in the city below where a poet is pressing on an iron bollard, a piece of street-furniture, recording perhaps the busy street-scene manifesting around him in the ‘half-real city’.

From the prologue of the epic poem Vale Royal (Goldmark, 1995) these verses recount the setting-out on a ‘star-crossed’ urban journey in which ‘the city of exterior light’ slowly transforms into a supernatural metropolis, a New Jerusalem. This vision of the city is acquired by a long painful quest which demands everything from the seeker: complete ’disconnection’.
As canals replace streets true spiritual light begins to reflect from the new waters and the traveller finds himself in ‘the place called Pan Cross’.

INVITATION TO THE GOLDEN QUATRAIN

This is a setting of the prophetic verse of William Blake which I have named ‘the Golden Quatrain’. (Yeats wrote in Autobiographies that these four lines unlock the whole London cosmology of William Blake.)

The fields from Islington to Marybone
to Primrose Hill and St John’s Wood
were builded over with pillars of gold
and there Jerusalem’s pillars stood.

INVITATION TO THE GOLDEN QUATRAIN